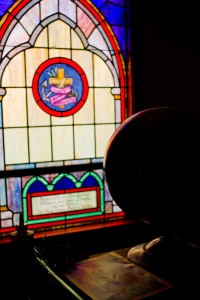 Each service was held in a log schoolhouse that doubled as the church. It was located a short distance from the present cemetery. Eventually, the schoolhouse was transferred a quarter mile down the hill to be used by African Americans for a place of worship.

In November of 1872, Pastor Irenaeus Condor gathered the members of the church for a meeting concerning the church building. They made plans for the current church building: 35 ft. x 46 ft. and a height of 13 ft. The inside of the church was arranged in a unique way. The church had two doors leading outside with an aisle reaching from the doors to the front of the church. Off the sides of the aisle were a row of pews. There was also a solid barrier built lengthwise down the middle of the church. In the very back, several pews were elevated, with the last row raised approximately four steps high. Men and older boys sat on one side, while ladies, girls, and small children sat on the other. The choir loft was in the back as well. A few pews were saved to the right of the loft if there were to be an exceptionally large crowd.

Sunday School was organized on May 2, 1875. The Valley Band held lawn parties at St. Jacobs a number of times, rotating its place of meeting. A group of ladies came together on May 26, 1894 and organized a Ladies Aid Society.

During 1933, 34 members contributed a total of $796 to fund the fence that borders the cemetery. That fence still stands today. The furnace and basement were added in 1945. Members of the church provided the labor. The interior of the church and basement were remodeled, costing approximately $4,000 in 1953. The new educational building connected to the church was added in 1957 and measures 20 ft. x 60 ft. Mr. J. R. Puffenberger designed and supervised the construction, which totaled a cost of $8,000. In 1970, a kitchen, a classroom, and restrooms were added. The addition was $6,575. Much of the materials and labor were donated by members of the church.

March 17, 1974 the organ was first used in a service at St. Jacobs. A unanimous vote was cast, and a decision was made to purchase the $2,958.80 organ. A new church sign was built by the congregation in 1982 to replace the former one that was demolished in a vehicle accident. A new piano was also purchased that year with the help of a $1,000 contribution.